SENNEBOGEN - getting the job done

The construction company Per Aarsleff is one of many companies involved in the extensive construction project in the Port of Copenhagen; called the “Frihavn”. A SENNEBOGEN 613M purchased from UN Mobilkraner ensures Aarsleff an efficient and safe workflow with lifting the various elements at the port site. 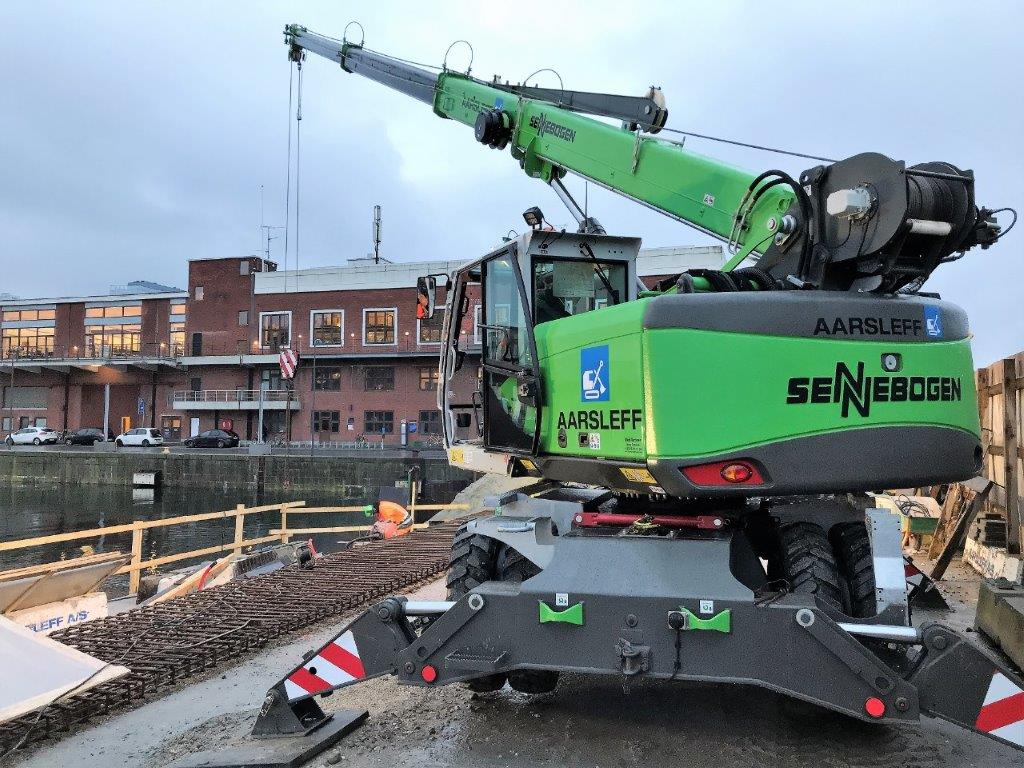 Per Aarsleff had their new investment in December 2019. The new SENNEBOGEN 613 replaced the company's 19 year old SENNEBOGEN 613! With an 18.8 m boom and a lifting capacity of 1.2 tonnes, the crane moves scaffolding, iron, and road blocking materials within the site at the Port of Copenhagen. And from day one, the new SENNEBOGEN crane has been a success:

”For this type of project the 613M is perfect! With a weight of 18-19 tonnes, rubber wheels and an easy rigging process, it is very easy to move the crane around the site, tells Peter Thygesen, machine operator at Per Aarsleff, and he continues:

"It only takes 2 minutes to make boom and outriggers ready. The crane has an outstanding mobility, and as a machine operator this is features we appreciate".

According to Kenneth Bjarne Nielsen, Site Manager at Per Aarsleff, the crane is not only easy to move around the site, but also extremely maneuverable:

”This project requires a lot of work along the quay side, so we do not have a lot of working space. It is a huge advantage that the SENNEBOGEN can work within the radius of the outriggers. The crane has a small turning radius, which enables maneuvering in a safe manner without risks of bumping into anything in the surroundings".

With large machines maneuvering around with heavy elements over the heads of the construction workers, a construction site might be a risky place to work. At this port construction site, people are not only working on land - but also on rafts in the water. This requires a lot of skills from the crane operator when carrying out lifts.

”Even though the crane cab is raised above the ground, this is not always enough to see the people working on the rafts in the water. The new SENNEBOGEN crane has an unique function, which elevates the crane cab. This function is crucial for the working safety, as it enables the crane operator to have a better overview and thereby avoid accidents, Peter Thygesen tells.

impressed with the service

Not only is Aarsleff happy with the new SENNEBOGEN  and its functions, but also the handing over by UN Mobilkraner. According to Kenneth Bjarne Nielsen this was exceptional:

"The experience of UN Mobilkraners service is second to none! When we received the crane we only used half a working day together with a technician from UN Mobilkraner, where we went over every function of the crane. I have never experienced such a thoroughness before”